Supporting families and saving the planet, one can at a time 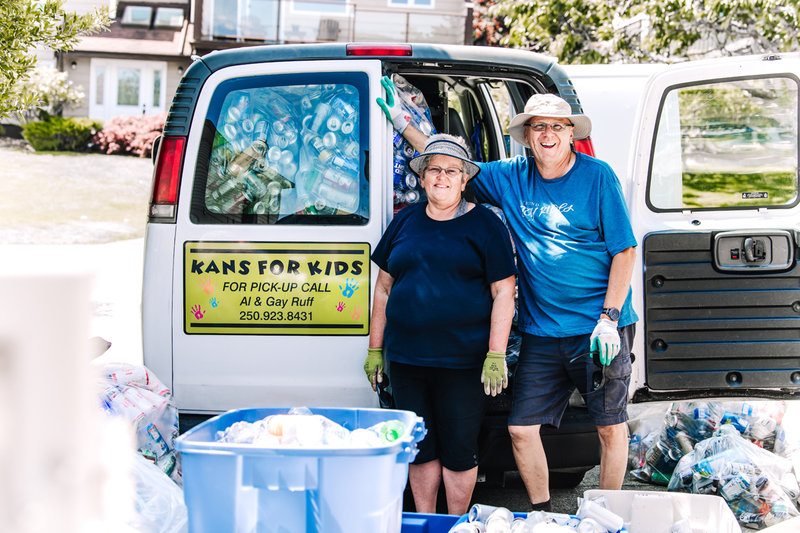 Seven years ago, Al and Gay Ruff were thrilled to hear that their son and his wife wanted to expand their family through adoption. “What an amazing gift to be given more grandkids!” they said. Al and Gay determined to find a way to help financially and committed to raise a certain amount of money towards that goal.

During their morning walks, Al took note of all the refundable items in the blue recycling bins along their street and figured that was a good place to begin their fundraising. He asked their neighbours if he could collect their refundable items and use them to help fund the adoption. They quickly met their goal, and the plan only grew from there. Before they knew it, Al and Gay had founded a ministry: Kans for Kids.

The couple recently returned their one millionth item to the recycling centre, an effort Al calls “a monster.” But they also believe that “God has put us on this earth to fundraise,” as Gay says, “and we wanted to expand it after the adoption money was raised.” They started sending the money to several organizations that help kids, and it has grown to include approximately 24 groups. It’s a lot of work but they’re thankful to be able to do it. They say they are “no longer retired but retreaded.”

Since the beginning of 2020, Al and Gay have collected and returned 623,000 refundable items – that’s $62,300 which was divided among the many charities, one of them being Focus on the Family Canada. The couple have had Focus in their lives for over 35 years, and they personally know the impact of our resources, as well as of our staff.

“I think the ministry from Focus that impacted our family the most was Adventures in Odyssey,” Gay recalls. “Those stories impacted not only our children, but also Al and I, as we were fairly new Christians, and we learned so much about God’s love and grace from Adventures in Odyssey. That was a really important part of Focus’ impact on our family.”

Al reflects on a time, many years ago, when their nephew was in a bad car accident during winter in Edmonton. “We had a relationship with Focus and asked for prayer, and they connected us with a Focus associate who was in Edmonton at the time. They went and saw our nephew and spent some time praying with him. Years later, I met the same guy heading up the Malibu Men’s Weekend that was sponsored by Focus and other ministries. It’s amazing how the Lord brings people in and out of our lives through the years.”

The couple recognizes that our culture has become increasingly resistant to Christianity and Christian organizations, but they still take the opportunity to tell people about the work done by ministries like Focus on the Family Canada.

“We want to live a life of sharing God’s love and the Gospel,” Al says. “When it comes to promoting Focus on the Family, we certainly encourage people with young families to pick up a Focus on the Family magazine or we give them one of ours. We say, ‘There’s all kinds of amazing stories in here with awesome resources.’ We hope that our donations are helping provide these resources for families, which in turn will help children.”

Beyond the goal of supporting charities, Al and Gay see Kans for Kids as a means to honour creation. “We feel very strongly about stewardship of God’s creation,” Al says. “We see so many unopened water bottles, and to think they were going into a landfill. It could be 100 years or more before that water ever leaks back into the system again. Whereas pouring that water out into our lawn, it’s going around and around like God intended it to be.”

Al and Gay are thankful that God has given them this opportunity to give back while they’re still able, and they hope this testimony will encourage others to give back in their own way.