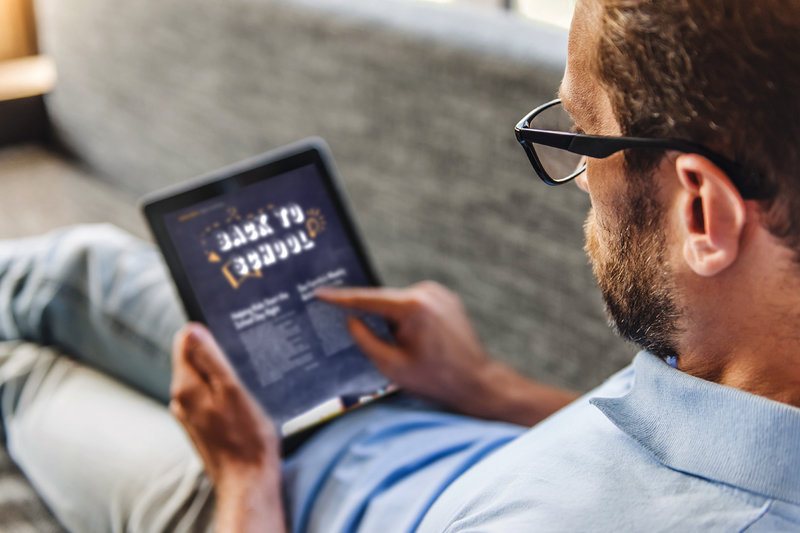 Murray is no stranger to receiving mail from different organizations. But in recent months, he noticed a drop in the volume of mail as ministries like Focus sought to steward their resources and finances during the pandemic. To that end, Focus began offering the Focus on the Family magazine in digital format.

As much as Murray loves physical print – “I love paper stuff, I like books a lot, I’m not into Kindle, I’m not high tech” – he saw this as a new opportunity to minister to others. “I wouldn’t have been able to forward [the magazine] on to people I thought those articles might have been of interest to if it had been on paper.”

What spurred Murray to share the digital version of the magazine was the content, and the people God has put on his heart.

“In the last year or year and a half, God has sent across my path three individuals who either have mental illness or have someone in their family dealing with mental illness issues. So I look for ways to relate to them in some way. I have been reading a few books on it to give me some background, but it is something that is very difficult for them to speak about. We will superficially talk about it, but as far as getting particularly deep about it, I’m not a counsellor, I’m just trying to encourage them along the way, that’s all I’m trying to do. So this is a way of encouraging them. If they want to talk to me, they can get back to me. If they don’t, they don’t. I just leave it with the Lord to speak to them.”

Murray recognizes that mental illness is an issue many people inside and outside the church still struggle to disclose to one another. “We don’t want to talk about mental illness too much. I think the church in general has had a bit of a stigma around that, and it’s not an intentional stigma. It has been a systemic thing in our background. My wife has had to go to the hospital for some infections, and they said, ‘It’s good you came in now, it saved it from getting really bad.’ That’s the same thing with mental illness. One of the biggest problems is that a lot of people are not desperate enough to seek help. You have to be really desperate to get help, and by then, it’s a major crisis. People aren’t willing to deal with it before it becomes a major crisis in their life.”

Still, Murray remains encouraged and hopeful about how far the church has come in meeting people where they are and with what they need. “Back in the day when, in the church, there would be an unwanted pregnancy, it wasn’t something people wanted to talk about. The church got a bad rap for that, and justifiably so. We didn’t treat those women with any help, and maybe we should have. These days things are so much more open about it, churches support pregnancy centres, we are aware of what they are doing. Focus supports those people very quietly in the background. Maybe through the parachurch, that’s what is needed to help people with mental illnesses.”

Stigma aside, Murray continues to look for ways to minister to those around him in tangible, practical ways. “[The digital magazine] enabled me in a non-threatening way of letting them know I’m concerned about them and am interested in them, but not prying. It says, I’m aware of you, we’re praying for you, even though I’m not in your face about it, here’s something to let you know how interested I am in you and I am thinking of you.”

To anyone who has donated to Focus on the Family and thus supported offerings like our magazine and our free one-time counselling consultation, Murray has this to say: “Thank you for making possible what is going on.”